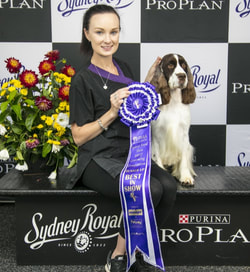 Tiarne grew up in the dog show world. Having first picked up a pair of grooming scissors at age 12 in her parents garage, Tiarne knew her passion in life was her dogs. Growing up with English Springer Spaniels Tiarne spent years working on perfecting their grooming and presentation for the show ring until in 2006 her parents purchased her, her first Cavalier King Charles Spaniel named Jessie. In 2009 Tiarne started a school project creating a business which in 2012 became the bases of her salon. Tiarne worked for two years as an Animal Attendant in a shelter while she built up enough clientele to rely on her salon and in 2014 she employed her first casual employee and added her first Toy Poodle to her family. In 2017 Tiarne was give the opportunity to groom and present a Miniature Poodle called Eddie in Australia from New Zealand for a period of 6 months. In 2018 Tiarne piloted Eddie to Australia’s NUMBER ONE Non-Sporting Dog as well as Number One Miniature Poodle and now 3 years on Eddie takes ownership of Tiarne bed. In 2019 Tiarne was give the opportunity to travel to China to groom and handle Miniature Poodles at the World Dog Show in Shanghai.

Tiarne Perkiss is the owner and founder of Perky Pooches Grooming Salon that was established in 2012.  Tiarne has won multiple Best In Show and Runner Up Best In Show awards in both the Grooming ring and Show ring and is a member of Groom Team Australia and the DGS Creative Team. Tiarne has groomed multiple breeds in multiple countries.

Tiarne has achieved her Animal Studies Certificate 2, holds a current Animal First Aid certificate and was a finalist for Young Business Women of the Year in 2015.  Perky Pooches was awarded Runner Up Best New Business in 2015 as part of the Illawarra Business In Heals event.

Tiarne continues her education in the animal industry as she believes education is the key to confidence in both the groomer and dog.

Kim competed in her first grooming competition in August 2104 placing in all categories she entered. 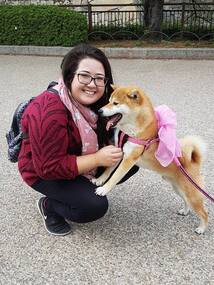 Annette
Groomer
Annette entered the world of grooming  in 2015 as a bather helping out in local salons, it was then that she decided she would like to learn to groom her own dog. In 2016 Annette attended The Grooming School completing her salon hair cut certification as well as her salon essentials certification. Annette joined Perky Pooches in late 2016 and continues to further her grooming skills. 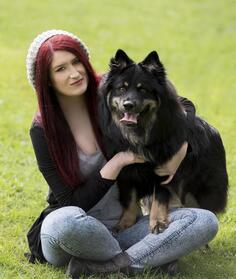 Tess
Groomer
Tess first started out as a hairdresser having completed her certificate 3 in hairdressing however became enamoured by the world of dog grooming when she was introduced to the dog show confirmation ring. Tess purchased her first show dog, Jinx, a Finnish Lapphund in 2016 and joined the team at Perky Pooches in 2017. Tess picked up the skill of grooming with ease having pervious experience with similar techniques and hasn't looked back since. ​ 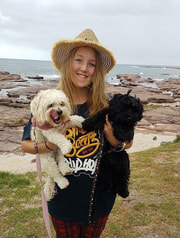 Caitlin
Groomer/Bather
Caitlin first attended Perky Pooches as part of the year 9 voluntary work experience program in 2016. Caitlin has a love of dancing and animals and is a member of the Wollongong Wonder Woofs Flyable team as a junior handler and trainer.  Her aim is to get a 0.000 perfect start at a competition with her best start to date being 0.001. Caitlin has a good rapport with nervous dogs and wishes to fulfil her dream of becoming a qualified dog groomer. 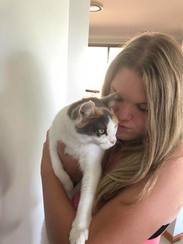 Katie
Bather/Prep Tech
Katie joined Perky Pooches in early 2017 and is fabulous with nervous and/or anxious dogs. Since joining Perky Pooches Katie has expended her skills and knowledge of dogs and aspires to one day become a groomer. Katie owns a cat named Pricilla and has a strong love for all animals and enjoys spending her spare time horse riding. 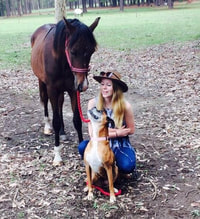 Tamika
Bather/Prep Tech
Tamika first started in the industry in 2017 working at Snuggle Pup and Cuddle Pooch. Tamika owns a horse named Reign and is aiming to become a groomer so she is able to groom her horse and her new dog she is planing to purchase in the future. By aiming to become a groomer Tamika will be able to transfer these skills into the world of horse grooming where she can create different styles and creative grooms on a larger scale.